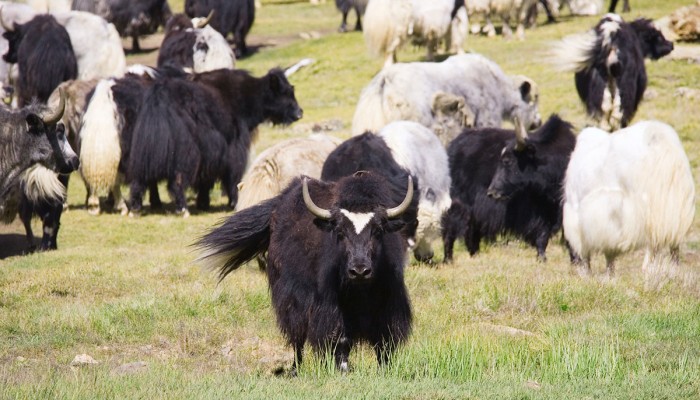 Yak, is the herbivorous species of animal which is reared as livestock that used for farming and dairy productions. The Yak is the best friend of Highlanders in the region of high-altitude where no general animals survive. The yak can live in snow and cold regions without any difficulties. The yaks are respectable animal species that yields highly healthy milk serves as means of transportations and helps in farming in highest altitudes of the world. The yak is also the source of meat, wool, bones, and leather in the Himalaya highlands. The yak is an admirable travel and carrier animal which can carry 255 pounds and travels at the speed of three miles per hour.

The general description of a Yak is a livestock cattle animal which is long haired and can survive in snow and is the source of meat, wool, leather, and dairy products in mountains, Himalayan region, Tibetan regions, snow-capped regions and other higher altitude regions of the world. The yaks are friendly natured animals with the heavily built body and can be trained easily. They have shaggy long hair with the undercoat of dense wool in the chest, thighs, and flanks and is generally insulated from cold. The yak is domesticated primarily as a farming animal, transporter animal, carrier animal, dairy production, meat, wool, and leather. The yak is the only mode of transport in Tibet, Himalayas and other high altitude regions of the world which are untouched by civilization. The yak is a good transport and farming animal for farmers, traders, trekkers, and climbers.